Have you said hello yet? 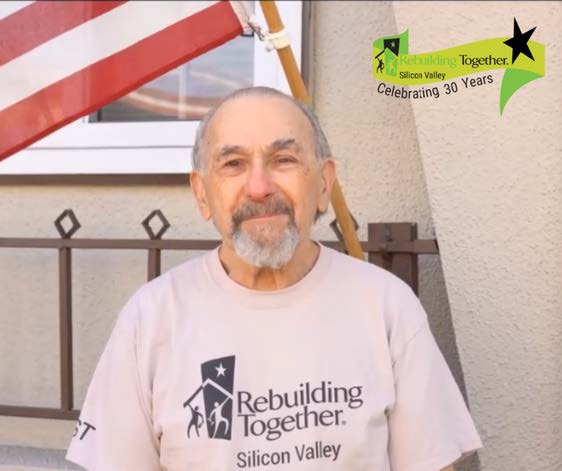 May is Affordable Housing Month as well as Jewish Heritage Month and as an organization that embraces all of our neighbors, we want to celebrate with the story of Neal, a member of our community whom we met during Fall 2020 Rebuilding Day.

Neal met his wife, Florence, after he returned home as a Korean War Veteran while playing the role of a Rabbi for a theatrical production in their local synagogue. He was a corporate attorney until he decided to retire and pursue apart-time career as a local theatre actor. Eventually, he went on to become a “real” Rabbi and jokes that his wife often told him “When I met you, you were playing a Rabbi and now you’re still playing a Rabbi”.

Florence worked as a paralegal and was an avid painter. They were both forced to slow down when she became seriously ill and began to use a wheelchair and 24-hour oxygen support.

Even though Rebuilding Day Sponsorships were in limited supply in 2020, we knew we had to find a way to assist Neal and Florence with their repairs. We pooled together our resources to the best of our ability and with the help of our community, we were able to complete the critical repairs that needed to be urgently addressed. With your support, we were able to enhance the safety of their bathroom by installing a handheld shower and grab bars as well as restore visibility in the home.

During Fall 2020 Rebuilding Day, a team of committed volunteers worked diligently while maintaining proper social distancing procedures and sanitization protocol in order to give their home a fresh coat of paint. Since we were prioritizing everyone’s safety, we asked all homeowners to stay in their homes as volunteers came to paint on Rebuilding Day, but Neal was so grateful for RTSV’s critical home repairs as well as for the volunteers painting his home that he figured out another way that he could give his appreciation.

He recorded a video addressed to RTSV thanking everyone for the work that they accomplished. “You have no idea the emotional effect that your work has for people who might not have otherwise been able to do these things. And for a senior, looking around seeing all you younger people out here doing this work: smiling, laughing…it’s quite uplifting”.