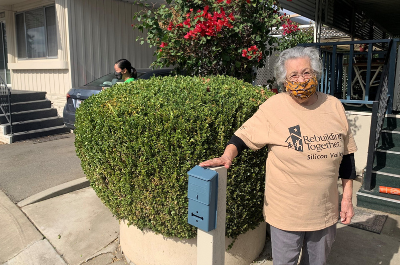 There wasn’t a dry eye among volunteers at the home of Nellie, a 93-year-old homeowner who has lived in San Jose for the past 30 years, during the kickoff ceremony of her project site on Fall Rebuilding Day. Once the House Captain reminded all volunteers of RTSV’s safety protocols, scope of work, and plan of action, he asked Nellie if there was anything she wanted to say. All eyes were on Nellie as she began to tell her story.

Nellie was only 15 years old when she began working in the fields and later in a cannery for more than 10 years. She eventually married and had 8 children. On a trip to Mexico with her husband, he abandoned all of them and Nellie had to work hard to pick up the pieces of her life and provide a stable environment to raise her kids alone. When she was 40, she went back to school to fulfil her dream of becoming a hairdresser. Before retiring, she worked at the Norman Y. Mineta International Airport in San Jose where she fondly recounted her memory of meeting Nancy Reagan. Eventually, she met her second husband whom she calls “the love of her life” and the two bought the mobile home that volunteers would end up working on during Fall Rebuilding Day.

She stood with her hands folded and looked at the group of volunteers who would paint her home. “I really appreciate what you’re doing for me today, “Nellie began. Her voice was shaky, her eyes welling with tears. It was clear that this was an emotional day for Nellie. She continued her message to the volunteers with her hands clasped near her face, “I’m so happy to see all this happen”. She paused again, her daughter came to her side, and the two of them held each other up as Nellie explained why seeing our [Re]Builders was so special. “It’s been a long time for this to be done. It’s been 10 years since my son painted the house for me.” Nellie looked to her daughter to help her finish their story.

“He couldn’t finish it. My brother couldn’t finish it because he passed away from cancer.” Nellie, her daughter, and the volunteers at her project site were in tears before Nellie found the strength to thank everyone for finishing what her son had started 10 years ago. 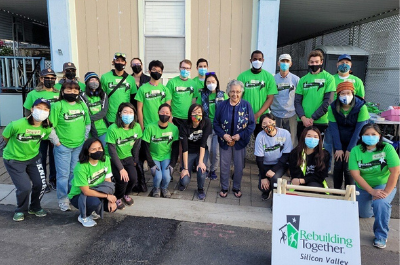 Volunteers came together to give the exterior of Nellie’s home a fresh coat of paint. RTSV staff had already completed repairs that needed to be urgently addressed around and in the interior of Nellie’s home. We were able to enhance the safety of her home by replacing siding, skirting, and windows before working on electrical updates and a stove top and oven replacement. Once these repairs were completed, Nellie’s home was ready for volunteers to come together and paint her home. 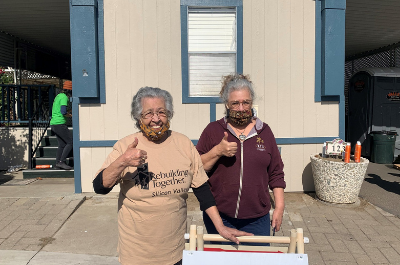 We are so incredibly thankful for Nellie who was such a gracious host to our volunteers. Thanks to your support, we were able to complete the life-changing repairs to keep Nellie safe in her home and to finish the painting job her son had started 10 years ago before his unfortunate passing.

At Rebuilding Together – Silicon Valley, we believe that everyone deserves to live in a safe and healthy home, so we help provide critical home repairs to over 600 clients per year, including to those who are aging in place. We rely on generous donations—like those on Giving Tuesday—to continue our essential work and the positive impact we have in these communities.

You can help us make a difference in these communities by donating to our cause today or you can learn more information about what your donations help us accomplish by watching Robert’s story!